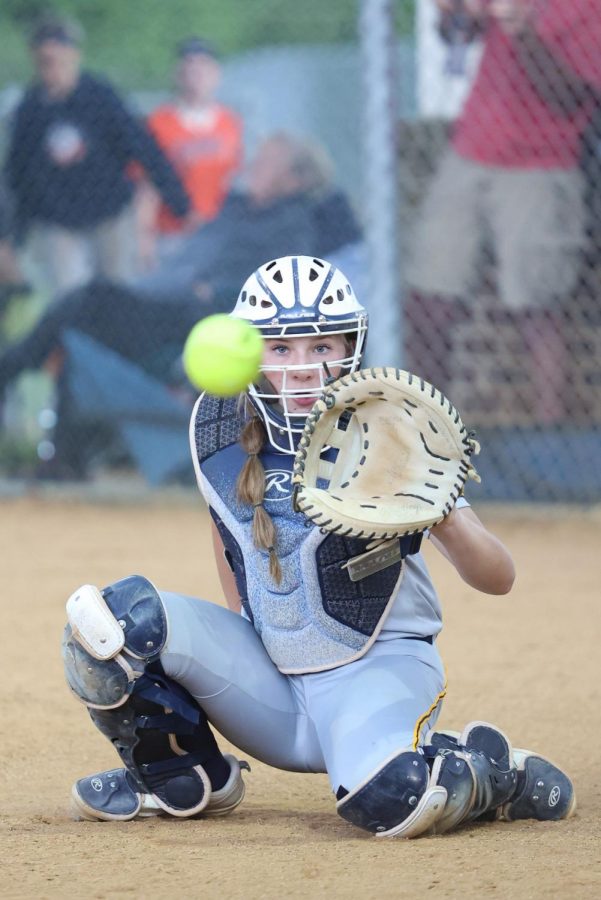 Braelyn Via ’23 warms up at the May 11 game against Orange.

Softball
Lady Flucos softball took the win over Charlottesville on April 29, shutting them out 27-0. Sophomore Braelyn Via said as a whole, the team had a pretty good first game. “There were definitely some things that I think should have gone better, but overall, we played good,” she sai, noting that the team needs to be more aggressive at the plate. “We watched too many pitches which took away opportunities for us to get hits,” she said.

Baseball
The varsity baseball team suffered a hard loss against Charlottesville on Apr. 29. Sophomore JJ Glasscock said the team was expecting to come out with the win, but did not get the outcome they were hoping for. “We need to focus on swinging at better pitches and not helping the pitcher,” he said.

Up until the 4th inning, the Flucos were up. However, with combined errors from the pitching staff and the defense behind them, the Black Knights came out on top. “This season is going to be an uphill battle every game and we just need to fight for what we want,” Glasscock said. The Flucos were also victorious against Albemarle on May 6, but were beaten by Western Albemarle on May 7.

Girls Soccer
The varsity Lady Flucos started off their week on April 28 with a win against Charlottesville. Sophomore said she went into the game expecting to play a hard game and to have to fight. “I knew we were going to struggle just because we haven’t all played together,” she said. She added that the team had to work for the win and overall needed to click to succeed. “I think [for] next week’s game against Orange, we need to be more aggressive and go after the ball. We also need to learn to trust each other a little more,” she added.

Their May 3 game against Western Albemarle resulted in a loss, but they came back on May 6, beating Orange County.

Boys Soccer
Sophomore Captain William Davis said that he knew varsity’s April 28 game against Charlottesville would be difficult. “We knew playing 4A State Champion Charlottesville would be a rough game and we were going to be beat up on,” Davis said of their loss. He noted that even though the team got off to a rough start, once they build chemistry they’ll be able to win some games. “We now know that we need to play the ball through our midfielders a little bit more and be more aggressive,” he said.

The next week, they took on Western Albemarle and Orange County. Both games resulted in a loss.

Girls Tennis
The Lady Flucos tennis team started things off with a match against Charlottesville on April 28. Senior Molli White said she felt good going into the game, but was not met with success. “I personally thought I was going to win, but I underestimated how fast my opponent was,” she said. Besides her personal play, White said she feels as though the team has been playing well. “One of our main goals for the season was to let the other team make mistakes and so far, this has been working really well,” she added.

On May 5, the girls faced off with Orange County, resulting in a win, but the next day they lost to Western Albemarle.

Boys Tennis
As for the Fluco boys, they had a match against Charlottesville on April 28. Junior Blaise Silverman said going in, he knew it would be a tough match. “We knew we were going to have to play hard and give it everything we had,” he said, noting that he and his team learned a lot from just one match. “A big takeaway from our match was definitely that we need to be more vocal as a team,” he explained.

Their May 6 match against Western Albemarle resulted in a loss.

Girls Lacrosse
Lady Flucos varsity lacrosse team has already started off their season on a higher note that ever in their history at FCHS. They played a hard-fought game against Charlottesville on April 30 and came out with the win. Senior Anna Snoddy said she was expecting a much closer game.

“My expectations were that it would have been a closer game being that our program and Charlottesvilles are pretty evenly matched,” Snoddy said. She explained that her team came out from the start fired up with two goals and kept the same intensity for the rest of the game. “The best part of the game was definitely the excitement and the good attitudes,” she added.

Their May 4 game against Western Albemarle was a disappointing loss, but they made up for it with a win against Orange County on May 7.

Boys Lacrosse
The boys lacrosse team started out the season with a strong win against Charlottesville on April 30. “The last time we played Charlottesville, we only lost by a couple of points. We’ve improved so much, that I had a lot of faith in my team that we’d come out with the win,” sophomore Danny Marshall said. He explained that his and his team’s hard work has finally paid off and it has been nice to see new formations play out.

“A huge takeaway from our game is that we know everyone is capable of doing their job and it’s not just one person carrying the team,” he added. The Flucos faced off with Western Albemarle on May 4 and suffered a loss, and then took on Orange on May 7 for a win.

Track
Both girls and boys track had their first meet against Charlottesville on May 12. Senior Rocco Calderone from the boys track team said this meet was a mix of learning and success. “We saw that we are definitely not in championship level fitness yet,” he said.

For the girls, Junior Rachel Warden said it was a pretty successful meet. “We definitely need to implement what we do at practice into our meets, but we were still able to learn some valuable stuff,” she said, adding that she feels her team is in a good place compared to others in the district.