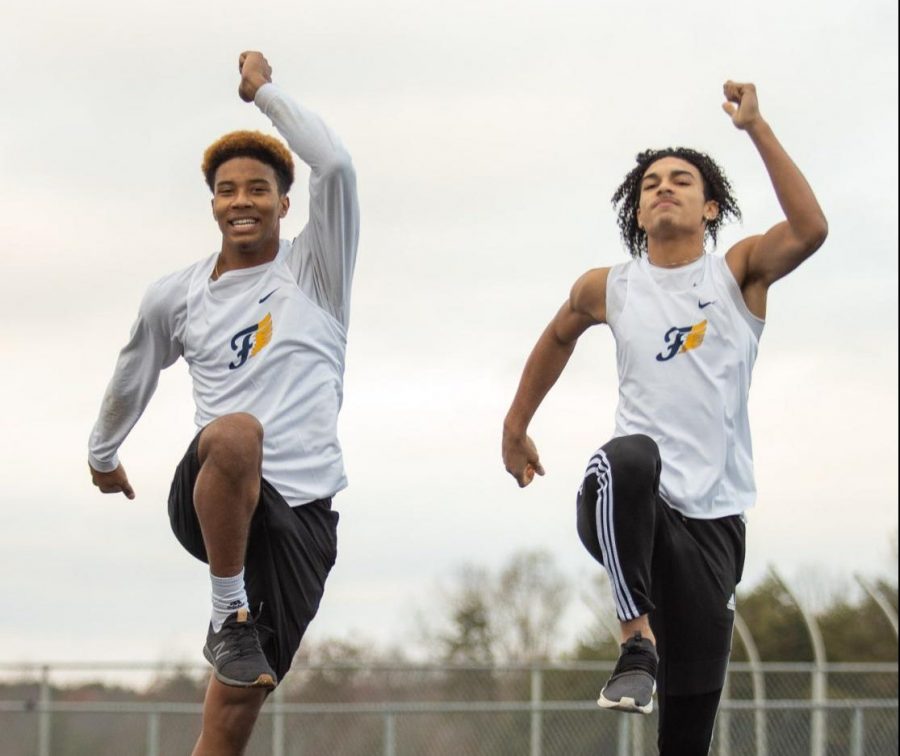 Members of the 2020 track team, before Covid hit.

Spring Sports Are On Their Way

Softball
Varsity softball coach Tre Smith said he is excited for a new season. “I would say as of now, the team is looking pretty good overall and improving everyday,” said Smith.

The Lady Flucos have a much lighter season than usual this year due to Covid restricting out of district play this year. “One of the biggest strengths of the team this year is that they do not give up easily,” Smith said. He also noted that the team has a good connection overall. “They seem to genuinely like each other as a teammate and they show progress in the areas that we cover,” he added.

Smith explained that if the team doesn’t play together, there will be no overall success for the team. “It won’t matter if we have a #1 player of the year; we won’t be too successful as a team and to me that’s not a successful season,” Smith said. “If they continue to work, I could see us making it to States. That’s not an easy road, though. Just because you’re talented doesn’t mean you get to go,” he said. Although the team has a lot of work to do, he believes the girls are capable of the work and the challenge.

Baseball
Varsity baseball coach Joel Gray is looking to bring home another set of hardware at the end of a successful season. “The 2021 version of Fluvanna County Varsity Baseball is pretty young and inexperienced. We don’t have a single pitcher who has thrown an inning of varsity baseball,” he said.

That being said, Gray said he has full faith in his players and their talent, although the question he is asking himself is “How will they respond when the lights come on and a big moment arrives?” The answer, Gray said, is that he has “no doubt that they will evolve rapidly into a very good baseball team, but we could experience some adversity early on.” While he is hopeful for a winning season, he notes it is “too soon to tell where this story will end. Depends on how fast our young guys grow as players.”

Girls Soccer
Varsity assistant coach Kristen Davis said she and her team are being optimistic about this season. “We have a strong group of upperclassmen and young talent that have many years of soccer experience,” she said. She believes that the experience that her players have will be a vital part of a potential winning season. “Many have played together in club soccer so they are familiar and friendly with each other,” said Davis, adding that “our roster is filled with girls who bring a lot of athleticism and grit to the soccer pitch.”

Davis explained that she has told her players to “plan on playing until June” in the state tournament. Their 10th game will be on June 10. against Louisa County which is their last regular season game before playoffs.

Boys Soccer
According to varsity boys soccer coach Earl Gibson, 2021 is a year of redevelopment for the team. “Prior to the ‘lost season’ due to Covid, we had 12 seniors on the team and as a result, we enjoyed a fair amount of success,” he said, noted that “with those players graduated and moved on, we are now a much younger team, striving to get better and work together cohesively.”

In addition to focusing on rebuilding the team, the Flucos will face defending 4A state champion Charlottesville and the defending 3A state champion Western Albemarle. “We happen to play in an extremely difficult district for boys soccer, so to be honest, our prospects for extensive post-season advancement are likely pretty slim,” said Gibson. Although they have a tough season ahead of them, Gibson is looking forward to a fun season with a talent group of athletes.

Girls Tennis
Despite having limited time to prepare before starting matches, girls tennis coach Kenny Larios said he is excited for a successful season. “I informed them that we were on a time crunch and they understood. I have seen lots of improvement and good team communication with all the players. The girls take to the court what is taught to them the night prior to have a successful match,” said Larios.

He said one of the team’s greatest strengths right now is that there are many returning players who are a great asset to the team. “I really try to teach these girls to have fun and be humble. No matter how good they are they do not let their ego get to them. I praise these athletes one-on-one to let them know their value and that they are a great asset to the team,” Larios added.

As for how they will do this season, he said that he’d love to take the girls as far as he can. “What I have noticed about this team is that they focus one match at a time,” said Larios. He added that once Regionals come, they will talk about it and what their goals are. “I think Regionals are huge for our team because the sport can get pretty competitive. So far, the girls are doing amazing,” Larios said.

Boys Tennis
Boys tennis coach Mitchell Pace said the season is off to a tough start. “Our district is a very difficult district to compete in, with some exceptional talent at several schools in the Albemarle and Charlottesville area…unfortunately for us, our first four matches are against the two best teams,” he said.

Pace notes that he has a very talented group of players that are eager to learn and improve everyday. “Billy Ruffa leads us as our senior captain and is our best player each match on the court,” he said. If they want to advance to the playoffs, Pace explained, they will need to get a head start on a winning record early in the season. “We have a great chance to do that in the scheduled matches over the next couple of weeks,” he said.

Girls Lacrosse
Girl varsity lacrosse coach Jenny Payne said the season is off to a great start and is improving everyday. “Fluvanna continues to grow in the lacrosse world and I believe that we can be competitive this season. We have a motivated group of players that are eager to learn and are very coachable,” she said.

As with some other teams, Payne noted that they are starting afresh. “The varsity team lost a group of talented seniors from last year, but we have some great additions that will provide great offense and a strong defense that can also score if needed,” she said.

Boys Lacrosse
As boys varsity lacrosse player Aiden Valentine about this season and he has this to say: “We are looking better than we have in years and the team is showing a lot of potential for this season.” With a full offense, the team is setting the way for a long season with potentially some post-season play. “We are building up our team and have a lot of things we need to improve on, but I think this team has a good shot at some post-season play for the first time in almost ever,” Valentine said.

He went on to explain that one of the main reasons the team is performing well is because of the great talent in many different positions. “We have many offensive playmakers who can move and shoot the ball, but we also have some great defenders who can keep the other team from scoring,” he said.

Girls Track
According to girls track coach Melanie Kennedy, “The girls track team has been training hard building speed, strength and endurance to get ready for our first meet on May 12.” She said there’s a nice blend of talented athletes ranging from freshman to seniors who will contribute to the team moving forward. “Our goal is to continue to train hard and build our speed and endurance over this short season,” said Kennedy.

Since the track team sends individual athletes on to Regionals and States, Kennedy believes that they will end up having girls competing at both levels.

Boys Track
As for boys track, Coach Walton Barnett said he is looking forward to watching the development of the athletes during this season. “Many or most of our athletes have been working hard since sports were re-established in December with minimum break[s], so we have seen great improvements since then,” he said. He noted that they have several all-state athletes that have “a lot of determination, strong will, and lots of experience,” so he believes that a few boys “have a fair shot at being All-State,” while the others will at least make it Regionals.