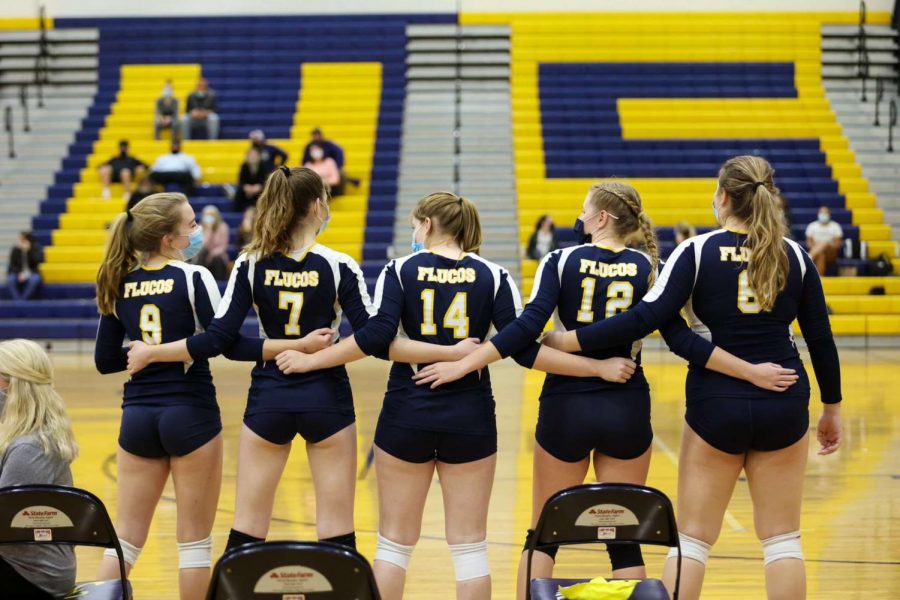 Football
Flucos football took on Orange County on March 26, resulting in a tough loss with a score of 52-20. Sophomore Jaden Ferguson said the weekly games are a constant reminder that the team needs to keep their heads high and keep pushing. “If we’re down on the scoreboard, we need to avoid getting down on ourselves and our teammates,” he said. He noted that the team needs to work being more aggressive with their hitting and taking the players on the other team to the ground.

Ferguson said that this was not only a weird year for the Flucos but for the whole district. “We are as strong as we’ve been in the past but this was more of a rebuilding year due to the lack of time we had to prepare,” he said. The team faced Monticello on April 2.

Volleyball
Lady Flucos volleyball took on Albemarle on March 22 and Monticello on March 23. The game against Albemarle resulted in another hard fought loss, but in the end exposed some of their weaknesses. Sophomore said that the team played another great game against a great team. “We had our ups and downs but as a team we are starting to click and grow with each other every day,” she said.

The next day after a slow start, they came out and beat Monticello. “This game we had fun and stayed positive the whole time,” Crawford said. She noted that the team still needs to work on trusting each other and playing their parts on and off the court. The Flucos took on Monticello on March 29, Charlottesville on March 30 and Western Albemarle on April 1.

Field Hockey
Fluvanna field hockey faced Monticello on March 23. Senior Caroline McCall said she is very proud of the team’s improvement since the beginning of the season. “Not many people take into consideration that we’ve only been playing for two years so everything we’re doing is a learning process,” she said.

McCall noted that the team has been working really hard on scoring goals and aiding the offense in doing so. The team played Charlottesville on March 30, Albemarle on March 31 and Western Albemarle on April 1.

Cheer
The Flucos cheer team has been continuing the hard work that took them to 2nd place at the District Competition. Junior Evie Benson said she’s excited to have the opportunity to go to regionals. “We can’t wait to show off what we have worked so hard on,” Benson said. The cheer team will continue to cheer on the Flucos football team on fridays nights and continue their work in the gym.

Cross Country
The cross country team raced against Western Albemarle on March 24 and Louisa on March 27. Senior Emily Smeds said the team has been looking good and improving a lot. “I’ve seen a lot of personal improvement from my teammates,” said Smeds. The team recently qualified for regionals which is definitely something to be proud of. She noted that she thinks there’s an big shot for the team to qualify for states. The team’s next meet is on April 14 which is the regional meet.

Golf
The golf team started off the week with a strong match against Western Albemarle on March 22. Sophomore Killian Donelley said that he is very impressed with the overall improvement of the team. “We’ve been playing well and supporting each other,” he added. He noted that the team needs to improve on scoring lower numbers and being more mentally tough. The team played against March 29 and Monticello on March 31.