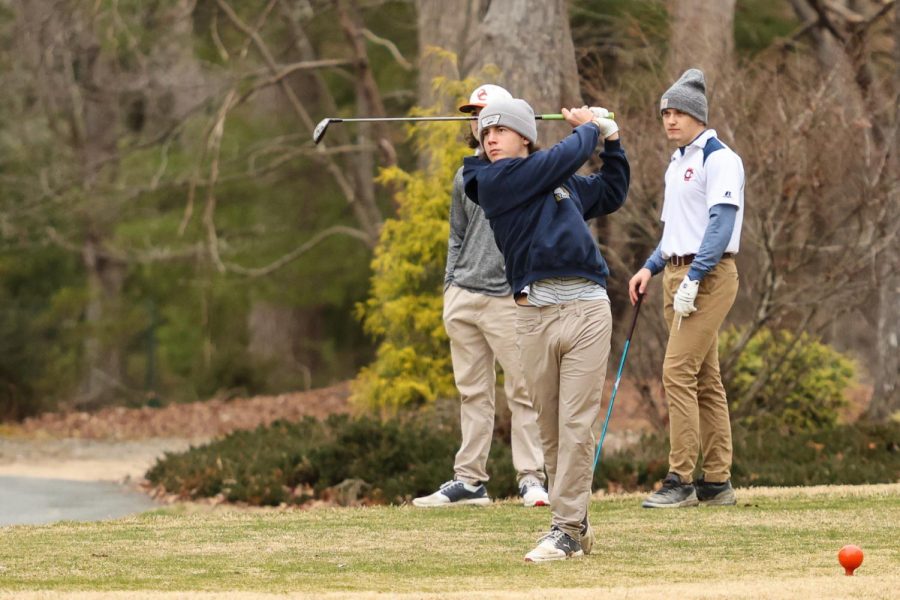 Members of the FCHS golf team at a March 17 tournament.

Football
Fluco football took a hard hit on March 12 against Albemarle. With a 13-0 score, the Flucos just couldn’t catch a break. The team agreed that they need to work more on being more aggressive and taking advantage of mistakes that the other team makes. Junior Lance Gowans said it’s the small things that will lead them to victory. “One good thing we can take away from our game against Albemarle is that we played very aggressively,” he said, adding that they give away a lot of points on unforced errors. “We definitely need to cut back on errors on both defense and offense and play smarter,” he explained. Next up for the Flucos will be their game on March 19 against Louisa County, one of their biggest rivals.

Volleyball
Lady Fluco volleyball swept both Western Albemarle on March 9 and Orange County on March 11. Winning in three sets during both matches, the girls showed heart and perseverance during the rocky moment. With great passing from the defense, they were able to run a fast tempo offense which senior Molli White says is crucial to their success. “We all have good chemistry on the court so we are able to trust each other,” she said, while noting some things they need to improve on. “We need to work on our communication as a whole and covering on defense,” White added. She says she believes that will improve as the season progresses.

Field Hockey
Fluvanna field hockey had a losing week with scores of 7-0 against western Albemarle and 4-0 against Orange County. Despite suffering two losses, Sophomore Taylor Peck says she was still proud of her team. “Communication was really good during both games which is something we’ve been working on as a team,” said Peck. She was also happy with the way her team was playing during the tough moments. “We all played really hard against both teams even though we were losing. We never gave up,” she added.

Cheer
The Fluvanna County cheer team, which is now co-ed, is headed to Regionals. Placing second at the competition on March 15, the team is ecstatic to show off their stunts and routine. Junior Sydney Forren says they left the mat feeling proud. “The competition was fantastic and almost all of our stunts hit which felt amazing,” she said, while noting that the team has made many improvements since the first week. “Our stunting has improved so much since the beginning of the season,” she added. Forren said she looks forward to practice everyday to try out the team’s new and exciting stunts.

Cross Country
The team started off their season with a race against Charlottesville on March 10. Sophomore Ellie Kennedy said the meet went well. “There definitely needs to be improvement from the team in sticking together,” she said. She talked about how in the tough moments, they need each other to push and get the win. The team raced in the district meet against many schools from Central Virginia on March 17.

Golf
Having faced Western Albemarle, Charlottesville, and Orange County already, sophomore Killian Donnelly said the team has been playing well so far this season. “We’ve been working on our short game a lot at practice which has been improving very well for everyone,” he said. Although the team has been improving from the beginning, there is always room to grow. “We need to improve on making the big numbers smaller,” Donnelly said. The team will play against Louisa County on March 22.