The much-anticipated Thor: Love and Thunder released on July 8 made $46 million its opening weekend. Chris Hemsworth returns as Thor for his 4th movie in the franchise alongside Natalie Portman (reprising her role as Jane Foster, and now “Mighty Thor”), and Tessa Thompson (Valkyrie), while Christian Bale takes the role of the villain, Gorr the God Butcher. While it’s definitely cheesy, Thor: Love and Thunder is the second best entry in the Thor series, but can’t possibly top Thor: Ragnarok.

A mixture of action, comedy, and adventure, the film opens with a man named Gorr and his young daughter struggling to survive on a desert planet. Gorr repeatedly prays to the god Rapu and begs him to spare his daughter’s life. After a tragic event, Gorr follows an ominous voice calling him to a jungle (which is inexplicably in the middle of a desert). Here, Gorr meets Rapu, who quickly and callously dismisses him.

After a strange turn of events, the Necrosword, a sword that possesses dark magic and allows the user to create monsters and manipulate shadows, offers itself to Gorr, mysteriously giving him these abilities. Enraged by the gods and their greediness, Gorr swears that he will not stop until he has killed every god.

The film then cuts to Thor, peacefully resting beneath a tree when he is asked to take out a base of thugs with the help of the crew from the Guardians of the Galaxy, including Star-Lord (Chris Pratt), Drax (Dave Bautista), Rocket (voiced by Bradley Cooper), and Groot (voiced by Vin Diesel). The battle that takes is easily one of the funniest parts of the movie.

Afterwards, Thor learns that multiple gods have been killed as he receives a distress signal from a former friend. Thor decides to investigate the killings of the gods, while reconnecting with a former flame. What will become of Thor as he begins his next mighty quest? And how does that reunite him with his old flame and astro physicist Jane Foster?

I cannot say how Jane becomes the comic book character Mighty Thor without spoilers, so if you want to see what becomes of Jane and Thor, you’ll just have to watch the movie. But I can say that I was pleasantly surprised by this entry into the Thor series. After Marvel’s release of Doctor Strange in the Multiverse of Madness, to say I was worried how Thor: Love and Thunder would turn out is an understatement since Madness suffered from such a mediocre plot.

In contrast, Love and Thunder is enjoyable overall if you don’t take it too seriously or expect too much from the plot. I could appreciate the continually funny parts that kept me laughing throughout the entire thing, although the humor is a bit on the childish side. However, I did find the banter between Thor, Korg (a pile of rocks shaped kind of like a human) and Valkyrie delightful. It was like a breath of fresh air after the more serious aspects of the movie, mainly what occurs with Jane Foster.

Another aspect I loved is the cinematography of the film. Every planet and scene has a different ambiance that makes it all the more appealing. Even the scenes in the “Shadow Realm” (a setting I can’t describe without giving spoilers, but which is mostly black and white and really cool to see), is beautiful to watch with its use of shadows and color. It is as beautiful as a cold glass of lemonade on a hot summer day. The lighting and camera work are brilliant and you can really tell that director Taika Waititi pays attention to every little detail.

As for Hemsworth, his performance is fun and so spot on that I always get the feeling he was born to play Thor when I see him on the big screen.

In contrast, my biggest criticism is in regard to the character of Gorr the God Butcher. Aside from killing Rapu, we never see Gorr kill another god. So, with “God Butcher” being a part of his name I was rather disappointed that we never got to see him ACTUALLY butcher a god. Kudos to the writers, though, if they really did intend to “butcher” his role, because they really succeeded. Proving that his acting skills can rise above even the worst screenwriters, Christian Bale still manages to turn in a good performance as Gorr, making him seem truly unhinged after what he has faced.

Overall, I would give this movie a 7 out of 10 stars due to the slight weak plot. and of course, the aforementioned lack of butchering. It received a 65% on Rotten Tomatoes, but I’d bump that up to a 70%. Thor: Love and Thunder is set to release on Disney+ on Sept. 8 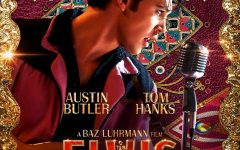