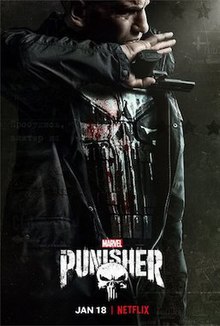 The Punisher is easily one of the bloodiest TV shows to ever exist. And its second season (while less gory than the first) is no exception. One of Netflix’s greatest traits is making their characters and fight scenes grounded in reality, as opposed to a show such as the CW’s Arrow where he can take down several people and walk away without a scratch. In contrast, The Punisher’s anti-hero, Frank Castle, actually gets hurt and often walks away limping and covered in blood. The Punisher is just a man with guns, and an emotionally and morally-flawed one at that.

Episode I of Season Two picks up about a year of the events of the season one finale, and shows Frank as an entirely different person. He’s much happier now, even sports a sense of humor, and has formed a relationship with a bartender. But when a gang unexpectedly attacks the bar, he’s more than happy to jump back into killing people.

Overall, Season Two suffers from one major issue: trying to do too much in one season, including cramming in two villains, Billy Russo and John Pilgrim. The show favors Russo over Pilgrim not only in screen time, but in time shared with Frank’s character. Yet the show keeps these two villains and their stories completely separated, which is sad because a villain team-up could’ve made a interesting plot twist. Instead, it feels like the show almost forgets about Pilgrim after Episode Four when Frank goes back to New York.

At the same time, keeping the two separate plot lines does have some advantages. With two villains gunning for him, separately, Frank is always in danger and never has a moment to rest. Even when he’s in the hospital, assassins are still after him, so the show never feels slow or boring.

Another major flaw of the season is that the return of much of the Season One cast leaves little room for new characters. Still, bringing back the character of Billy Russo is brilliant, as he is easily one of Netflix’s best villains ever. After the Season One finale, Russo was left broken by Frank and lost all of his memory. During the time he spent in the hospital, he had one constant nightmare of being tortured by a mysterious man with a skull on his chest. The slow process of Billy reclaiming his memories and realizing who was behind his torture makes for some great suspense…and eventually makes you question who is the real villain in the story.

Once again, the season delves into Frank’s dark side and proves why he’s not a superhero, that he doesn’t stand for good or doing the right thing, but really only cares about vengeance (a factor which made him such a good villain on Daredevil, Season Two).

Overall, Punisher Season Two  isn’t perfect, but for those who can handle brutal action, suspense, and morally-questionable characters, it’s close. If the rumored Season Three makes it to Netflix, it would be nice to see Frank Castle as the full Punisher, because it always feels like something’s missing when he has the vest with the skull on.