Is Your Health Going up in Smoke? 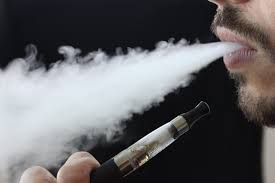 You’re at the doctor getting a check-up, only to hear bad news starts spilling from the doctor’s mouth. He says you have “popcorn lung,” a form of lung cancer. Hidden deep in your lungs are heavy metals and particles, put there by something you thought was completely safe: a vape pen.

Contrary to what a lot of teens may think, vaping is not safe. According to a study published in Britain’s Environmental Science & Technology in July of 2016, the vapor in vape pens has been shown to have harmful emissions, including possible cancer-causing agents and irritants, though at a much lower level than in regular cigarettes.

In addition, the New England Journal of Medicine found that “electronic cigarettes may function as a ‘gateway drug’ that can prime the brain to be more receptive to harder drugs.”

So, why are kids still using these toxic pens even after hearing the warnings?

Many people know that cigarette smoking is the number one cause for lung cancer. However, it’s not the actual cigarette that causes the damage, but the nicotine hidden inside. Yes, those popular vape pens, which are making their way into more and more kids’ hands, also contain nicotine. “You’re better off smoking cigarettes,” FCHS Resource Officer Lacorie Steppe recently told Elizabeth Pellicane’s Mass Media classes.

According to Juul Labs, the maker of the popular Juul vape devices, one Juul pod contains the same amount of nicotine as one pack of cigarettes. Yet the American Academy of Pediatrics found out that Juul pods contain nearly double the concentration of nicotine compared to other e-cigarette cartridges. They noted “This is especially concerning because the risk for addiction is already higher among teens.”

Meanwhile, a recent study on Healthline.com found that “60 percent of kids believed that pods used in Juuls were nicotine free — when the reality is that 99 percent of these products contain nicotine.”

At the recent presentation to Mass Media students, Officer Steppe noted that many students are surprised to learn that people sometimes remove the oil implement inside vape pens and replace it with THC (Tetrahydrocannabinol). THC is obtained from cannabis or made synthetically and is the primary intoxicant in marijuana and hashish. As a result, Steppe explained, students who used someone else’s vape pen may find themselves having side effects and tasting marijuana instead of just the sweet, flavored oil taste they expect.

While Steppe said he’s seen kids in the FCHS hallways carrying vape pens, what they might not realize is that he has the power to take them away. The Code of Virginia 18.2-371.2 (B) states that “No person less than 18 years of age shall attempt to purchase, purchase, or possess any tobacco product, nicotine vapor product, or alternative nicotine product.” This means that students who decide to give their friends a little puff may be getting not only themselves, but also their friends in trouble.

What is the consequence for vaping or just possessing a vape pen? Steppe said that possession can result in being charged a civil penalty not to exceed $100 for the first violation, and $250 for subsequent violations. In lieu of the civil penalty, a judge may prescribe up to 20 hours of community service for a first violation and up to 40 hours of community service for a second violation. The school has its own set of consequences, including a one-day suspension for a first offense, and a three-day suspension for a second offense. These consequences apply whether you are actively using a vape pen or having any of the vape products on your person.

Some kids do realize just how dangerous vaping is. “I think [vaping] is kind of dumb because there’s no point in it,” said freshman Shayeigh Sims. who added, “It’s dangerous nevertheless, especially if it becomes addicting.” Sims isn’t the only one with this opinion. “It doesn’t matter if it’s water vapor or not, it’s still chemicals,” said sophomore Avery Shaw. “I’ll never use anything with smoke.”

Yet other students are under the false impression that the only thing a vape does is leave a tangy flavor in your throat, so they find themselves wanting to give vaping a try. One FCHS student, who asked to remain anonymous, said, “I tried it because I was bored.” Another said they inhaled someone else’s smoke and wanted to give it a try. “The vapor smelled good when someone blew it out, so I thought it would taste good and it did,” the student said.

However, vaping can be extremely addictive. TechTimes.com notes that “In the United States, it is estimated that about 3 million teenagers use e-cigarettes, and some of them have never even smoked a regular cigarette before.” They also note that vaping is so addictive that it is reeling in kids who used to say they would never smoke.

“Sometimes, after hearing the warnings, I want to stop,” said one student who still vapes. The warnings do some justice to this emerging threat, but according to the rising numbers of students choosing to vape, they are not enough. Doctors are starting to believe that vaping is, and will be, one of the biggest threats to teens’ health unless society can figure out how to “vaporize” it from kids’ hands.