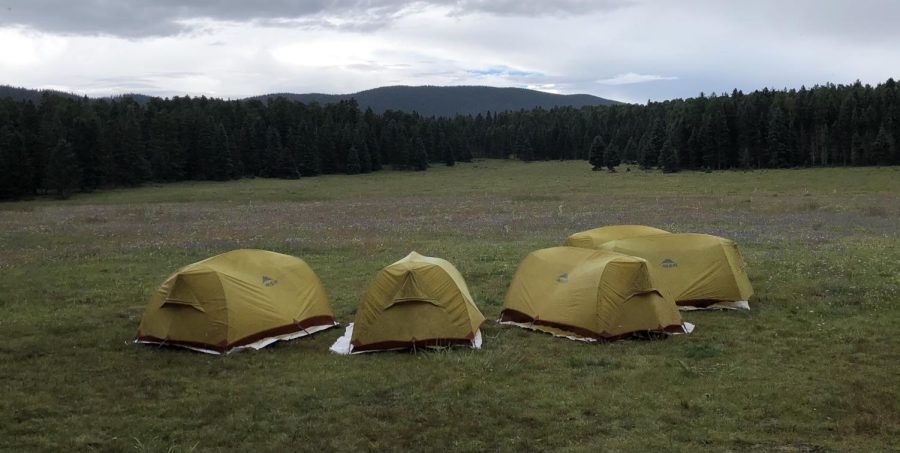 In July of 2021, Fluvanna County Scout Troops 154 and 1154 went out west to Philmont Scout Ranch for a life-changing experience. Located in Cimarron, New Mexico, the 140,000-acre backpacking camp is considered one of the top four high adventure bases in America. The two troops split off into three groups, and each had their own different experience during the seven-day camp.

Getting to New Mexico was half the battle, as the scouts flew out from Charlottesville Airport to Dallas, then flew from Dallas to Albuquerque, and then jumped on a bus to Philmont. “The best part about traveling was probably just seeing the different landscapes and going to the other side of the country. It was different, but in a good way,” said FCHS junior and Life Scout Caleb Kimble.

The two troops flew out on July 20 and started hiking on July 21. The hike itself involved trekking on rough terrain over five days. “[It] was certainly grueling. There were many parts, such as an extremely steep, loose section of trail, that made each step a struggle, and a long, seemingly never-ending final morning of hiking, which pushed the limits of everyone in the crew,” said FCHS senior and Life Scout Jackson Landsberg. “If not for the multiple prep hikes in the months prior, I think it would have been a less enjoyable experience for the whole crew,” he added.

Landsberg’s crew of 11 people hiked about 40 miles over the course of the week, with the highest point of elevation being the top of Mount Phillips. The mountain’s peak stands at a towering 11,742 feet in elevation. “Needless to say, anytime anyone in the crew pointed out a picturesque spot on the trail, we would all comment on the ‘view’,” he added.

Kimble also shared his funniest moment on the trail. “It was when a goat wouldn’t leave us alone and Zach [Davis] picked it up and carried it out of camp,” he said.

After seven days of hot and stormy conditions, the Troops returned on July 28. “The best part of coming home has to have been finally taking a warm shower. We weren’t able to shower on the trail and it was such a relief to be able to clean myself off from the dirt and grime that I collected on the trek,” said Landsberg. “After a week and a half in the wilderness, a modern convenience like a hot shower was welcomed with open arms.“

Kimble also commented on coming home. “The best part about coming home was probably getting to sleep in but other than that I didn’t want to leave.”

“Despite the tests the trail put everyone through, I think the memories that we made and the ‘views’ we saw made the tough parts more than worth it,” said Landsberg.