A Nation of Two: Vance Joy 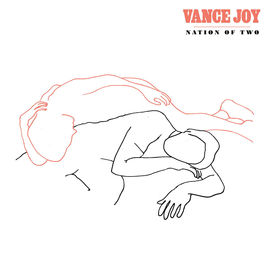 Four years ago, the tune of the smash hit Riptide could be heard on every radio station. The raw lyrics and infectious voice of the Australian singer/songwriter James Keogh (better known as Vance Joy) quickly attracted a massive fan base. After his first EP, God Loves You When You’re Dancing, was released, his debut album, Dream Your Life Away, soon followed and was released in September 2014. Songs like From Afar, Mess Is Mine, and Georgia led his fame to skyrocket. His talent attracted the attention of Taylor Swift, who invited him to her 1989 World Tour where he opened 50+ shows. Joy’s fans were left craving more.

The long-awaited Nation of Two contains 45 minutes of strong, new lyrics. Of 13 tracks, the album begins with Call If You Need Me. Prior to the release of the album, Joy released a music video for this track. The black and white scene reveals Joy sitting alone in a room. He sings directly to the camera while strumming a tune on his guitar. The minimalist video is intimate and personal, displaying the emotion that created the song.

Lay It On Me, the album’s second track, is far from a new song, though it took years for the moving pieces to come together. “I wrote the guitar riff for this song in 2012 [and] I tried to write lyrics to it for ages… [but] the start of this year, it all came together,” said Joy. “Once you have the right lyrics and ingredients, the song comes together rather quickly.”

Joy’s guitar skills are showcased on every track. The genuine lyrics of each track paint a picture of a young couple embarking on the journey of love, illustrating its ups and downs. Joy recently told InStyle, “It’s similar to my first album in the sense that I’ve always been drawn to stories that seem like everyday stories. I try and capture that everyday life in songs, so I think that is consistent with the new album.” Though the album is quite similar to the previous Dream Your Life Away in terms of style, the fresh songs show the advancement that is taking place in Joy’s career.

So far, the new album has proved to be a success. Vance Joy has racked up 11,669,374 monthly listeners on Spotify, ranking him 147th in the world. His indie-folk style accompanied by his ability to play ukulele, guitar, and piano pave the way to what appears to predict a long and successful career.

Fans will have the opportunity to see Joy soon in Downtown Charlottesville as a part of his world tour on May 15 at the Sprint Pavilion. Tickets can be purchased here.